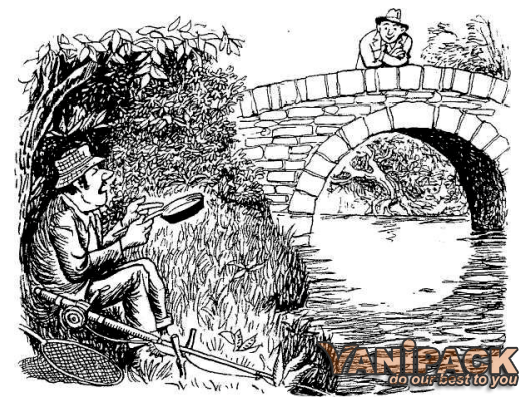 One morning a man was crossing a narrow bridge when he saw a fisherman on the shady bank of the deep, smooth river under him, so he stopped to watch him quietly.
After a few minutes, the fisherman pulled his line in. There was a big, fat
Fish at the end of it.
The fisherman took it off the hook and threw it back into the water. Then he
put his hook and line in again. After a few more minutes he caught another big fish. Again he threw it back into the river. Then, the third time, he caught a small fish. He put it into his basket and started to get ready to go. The man on the bridge was very surprised, so he spoke to the fisherman. He said, ‘Why did you throw those beautiful, big fish back into the water, and keep only that small
one?’
The fisherman looked up and answered, ‘Small frying-pan.’